December 1967. It was the worst blizzard in years as Maj. Howard Murphy and his copilot waited for clearance to take off in their Douglas C-47 cargo plane. The mission: classified. So was the destination. The only cargo was a mysterious crate with no markings. He was under orders not to leave the cockpit and approach it. But curiosity got the best of Maj. Murphy.

GHOST FLIGHT: A SHORT STORY is available in ebook from Amazon

After co-writing 10 thrillers with Lynn Sholes, Joe Moore has started a new action/adventure series that introduces Matt Skyler, a marine salvage expert specializing in military recovery. Skyler is the director of OceanQuest based out of Key West and, among his numerous accomplishments are the raising of a Russian sub off the coast of Bermuda and an ancient Roman warship from the bottom of the Nile. Skyler thrives on solving the impossible. 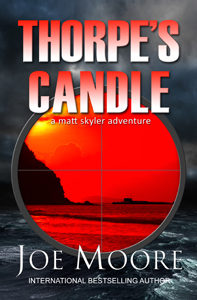 A Soviet nuclear submarine flying a skull and crossbones kicks off this gripping international thriller!

This adventure started when Matt Skyler stepped onto the windswept deck and filled his lungs with fresh ocean air. Alone, he stared out at a moonless night. The stars washed across the heavens and glistened off the water. A flash of light caught his attention. A large object moved on a parallel course with the ship—it blocked out the reflected starlight.

Skyler made out faint white lines of foam curling along its edge. His eyes adjusted and his pulse quickened. It was something he’d seen before on another night, another ocean.

The low round profile with its slight humped back, the tall stark tower topped with antennas, and the tail fin that cut through the water like a shark’s. There was no mistaking the distinctive profile of the Yankee-class Soviet nuclear submarine. It bore no markings, only a single black flag flying from the tower. Its insignia—a white skull and crossbones.

“This was an exciting read. Matt Skyler was a great character as were the secondary characters. They felt real and down to earth. Many main characters in this genre are a bit larger than life, but after reading enough of these types of books, I know what to expect and Matt fits the mold of a MacGyver type who can get himself out of anything. Your plot and writing made it work. The story wasn’t outlandish – all the dots were connected, and it made for a satisfying read. I also enjoyed how you began the book. It was intriguing enough that it drew me right in as I tried to figure out how the 1961 plane crash was part of the overall story. Your voice and writing style is succinct and to the point, adding to the tension and quick pacing that books in this genre need to be successful. I enjoyed the humor between Skyler and his crew, breaking the tension enough for the reader to take a breather before the next adventure unfolds. All in all, a fun, exciting read. Great job!” — Judge, 8th Annual Writer’s Digest Self-Published eBook Awards.

THORPE’S CANDLE is available in print and ebook from Amazon and Barnes & Noble.